I had a half-hour visit with Chris Binchy (novelist, DunLaoghaire-Rathdown writer-in-residence, and Maeve's nephew) in Stillorgan library yesterday, and it was really encouraging. I had sent him the first nine A4 pages of "Despite the Angels" to comment on.
He liked the writing, and though he had a few minor suggestions about style, there was nothing major, and I agree with all his improvements. He liked the idea of the book, and feels it should be published. In fact he seemed surprised that it has not been taken up already by a conventional publisher. But of course, just now is a terrible time for old-style publishing.
We had a long chat about 'genre' because on Amazon as well as with ordinary publishers you have to be clear what genre your book is. Chris feels this is a pity as writers then write to fit the genre rather than writing the book that they want to write. No trouble with me on that one, I have always been a rebel, and so far it has rarely done me much good!
For me the most exciting thing in the meeting was that Chris thought my book is 'almost literary fiction'. That's not good from a sales point of view, as some people are scared of 'literature'. But for my confidence it's great, a good reflection on the actual writing.
I came out with my writing-energy replenished, and my optimism ratings hugely improved. Many thanks, Chris, and DunL-Rathdown County Council for making these meetings possible.
Posted by MadelineAnn at 15:18 No comments: 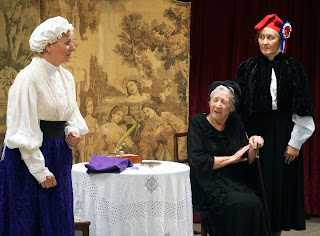 Dress Rehearsal went well last night. Here is the famous revolutionary hat. My 'mother' here is totally dotty, and spends her days by the guillotine, revelling in 'traitors' blood!' We are greatly disturbing the woman of the house, to the left, and the whole thing goes very wrong. It is called "Idols" and was written in 1937 so has some charming inaccuracies.

Posted by MadelineAnn at 12:44 No comments:

All writing is re-writing

So I am getting on with the pre-editor editing. It's a while since I wrote Despite the Angels, so it's almost like reading it fresh! I've been sad all along that I was never going to be able to just read this story, it's just the sort of thing I'd like....
The easiest part to write was the spirit guides' conversations. All completely made up stuff, but just laid itself down on the page as though it was being dictated. Perhaps it was ! (spooky??)
My third book has no angels or spirit world in it, and although I'm enjoying my characters, I do miss my angel friends. So expect a third angel-y book in the future.
Posted by MadelineAnn at 17:13 No comments:

Our class was visited on Monday by Lawrence O'Bryan, of the recently published 'The Istanbul Puzzle'. He got a three book deal largely because the publishers were impressed by his web presence. And his book is good - a mystery thriller which I am half way through, and enjoying. It was great to hear how he did it. He's now writing 'The Jerusalem Puzzle'. He knows Istanbul well, I wonder if he is travelling to everywhere he is curious about, to set novels there? Like I said, great excuse for some travel.
Posted by MadelineAnn at 12:17 No comments:

I gave my friend A my second novel to read a little while ago, and she dropped it back this evening. It is called 'Revisited Sins' and will get onto Amazon (and other places) once Despite the Angels is launched. She was very positive about the book, found herself turning the pages, and had one or two useful and constructive criticisms to make. Thanks to all friends who are prepared to help! A bit of re-writing can only make the book better.
On a drama note - I had no idea how difficult it is to make a rosette! (for my revolutionary costume)
Posted by MadelineAnn at 22:21 No comments:

My photo at last!

As I said, I am only learning all this digital stuff, and am climbing a vertical learning curve with my (rather good) fingernails... But at last I have worked out a)how to scan in this nice photo, and b) how to get it onto here/twitter/facebook. So I am feeling that little bit more confident in my eventual ability to get my books up there too!  As well as having bronchitis this week, and making a 'Phrygian cap' for my part in 'Idols', I have been re-writing the prologue for 'Despite the Angels'. It is now much clearer for those readers who will not have prior understanding of the concepts of re-incarnation. Next I must work my way through the whole book and do the same. There are sections about Lucy and David's past lives in Crete, the Médoc, and Dundee, all of which I visited to get it as realistic as I can. A great excuse for travel - now, where will I set my next one......
Posted by MadelineAnn at 22:21 No comments: