So what effect does a free promotion have?

Over my three-day promotion, which ended at midnight California time, a total of 1248 books were downloaded. All but 13 from amazon.com, .co.uk, and .de . During the promo, Despite the Angels rose and fell, its highest ranking of free books was #455, which was at 2.15pm Irish time on Sunday. It hit a high point of first place in 'Romance-paranormal-ghosts' for a few hours, and then settled to #3. This was a little mystifying, as there are no ghosts at all in the book!
I decided eventually that someone in Amazon must have seen the phrase 'spirit guides' and latched on to 'spirit'. But of course spirit guides are definitely not ghosts!
The book also got up to 8th position in 'romance-paranormal-angels'.
All that is of no importance really, it is what happens now that is of significance. And sadly, that is not likely to amount to much. The book is at 315,003rd overall in amazon. This is probably about half way up, but it is still totally invisible. It would be similar to your book being stocked by a big bookshop, but left in the storeroom!
People who specifically look for either ghost or angel books may stumble across it, at #204 out of 1399 for ghost, and #128 out of 633 for angels; but looking at the others in those lists (only the covers, admittedly) made me feel they were not attracting the readers who would want and enjoy my kind of angels!
So I have more research to do, to work out where to market it next. if any of you have read "Despite the Angels" and are familiar with Amazon's genre selections, maybe you would be kind and give me your opinion?
Posted by MadelineAnn at 16:56 7 comments:

The big push is on, and nearly 10 hours into the free offer, "Despite the Angels" is ranking 2,890th in the free list, but #10 in 'paranormal-ghosts' which is mystifying as there are no ghosts in the book!!
Please both download the book and pass the word around. This is my book's chance to become 'heard of', and visible to the casual browser.
And it's a cheerful read, anyway, so it's one of those rare win-win situations.
Thanks
www.amazon.com/dp/B00C438T0E      and www.amazon.co.uk/dp/B00C438T0E
if you don't have a Kindle you can download a free 'kindle app' onto your pc/ ipad etc, and then download the book

And by the way - those who prefer paperbacks can now get one from www.createspace.com/4232303
Posted by MadelineAnn at 17:51 2 comments:

Email ThisBlogThis!Share to TwitterShare to FacebookShare to Pinterest
Labels: Despite the Angels, free offer, Kindle, paperback

'Despite the Angels' FREE this weekend!

This weekend, 25th -27th May inclusive, the exact starting time to be chosen by Amazon in USA, my book "Despite the Angels" is free to download to Kindle. If you don't have a Kindle, download the free 'Kindle App' from Amazon onto your pc/ipad etc, and then you can download the book.
If you like the book, please go onto amazon.com and amazon.co.uk and leave a glowing review!! Ebooks depend on good reviews to become visible to the casual browser, and strangely, Amazon only consider 4 or 5 stars out of 5 to be good. A three-star review can help a book to sink further into obscurity, even if the accompanying words are fulsome in their praise! Weird, but that's how it is, so please give 4 or 5 stars unless you think it deserves a bad mark.
For those of who who prefer to read off paper, a little more patience only, it is nearly available in print!

I'm really looking forward to hearing what everyone thinks of my story....
Posted by MadelineAnn at 17:52 2 comments:

Back from a holiday 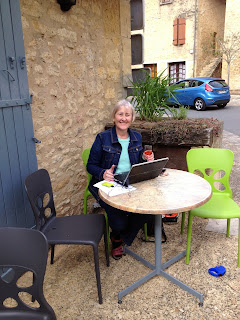 So I survived the A to Z challenge - congratulations to all who did! It was a hectic month, as I also published "Despite the Angels", and formatted it for a paperback version. My first proof copy arrived, and I found I had the 'gutters' too wide, numbers on the blank and 'front matter' pages, and had forgotten to right-justify! So back to the drawing board, and as I write this I am expecting the new proof to arrive. The photo is of me ordering it from Createspace. We have no Wifi where we stay in France, so I 'have to' go either to a friend's, or as here, to the local bar/restaurant. They do a very good rosé wine which pays for my use of their facilities without causing me any distress at all! (They also do very good food, and best of all, they know us and greet us with kisses.) The weather was cold, I think all of Europe is having an extra autumn this year.
I'm back now, and getting back to my third book, as yet un-named.
Posted by MadelineAnn at 11:07 4 comments: