My 'book trailer' is finished! My huge thanks go to Derek and Maire for acting, to Fergal for filming, and to Nigel for editing. (I just wrote it...) I think it's great: have a look, and pass the word to others who might find it entertaining!  "A Frustrated Angel"
Posted by MadelineAnn at 18:32 1 comment:

I have sometimes confused people by saying "Life is not just too short, it is too narrow as well" -meaning I want to do lots of things Now, not simply live a long time. But I never knew how many of life's experiences would come my way as result of self-publishing.
Publishing your own book, though fraught with difficulties and puzzles, is actually the easy part. (Well actually writing it is the easy part, but that's another story!) Getting the book out there to people who would enjoy it seems to me to be like the torment of Sisyphus!!
I did a course on epublishing a while ago with Catherine Ryan Howard, who suggested making a book trailer. She showed some examples that she felt would work, and they were all little stories in their own right, not descriptions of the book. So I wrote a script. It is about a man who can't find a cheque, and his guardian angel's attempts to help him. I'm lucky to be in two drama groups, and from one I assembled a team - two actors, a great cameraman, and a film editor. We had two rehearsals, then last Sunday was filming day. I watched with huge pleasure as two friends acted their hearts out (and missed a lot of sunshine, it was the best day of the year, maybe the decade!) and the others wielded camera and clipboard with great skill. We had 74 separate takes by 4pm, when we all went home to enjoy the sun and cool and calming drinks!!
It will be a week or more before this is all cut together to make a less than 5 minute 'play' which I hope will entertain people enough that they will share it with their friends.
It felt a huge honour to have these four great friends (five actually, as the editor's wife came along to take notes; not to mention another partner who provided great sandwiches!) spend this time on my work. When else, in the normal world, would I get the chance to be a film author or film director? And set-designer to boot! It is great to be able to have such experiences. 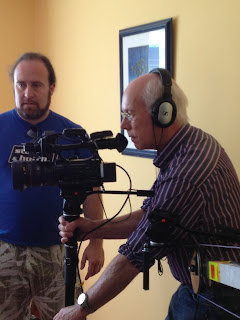 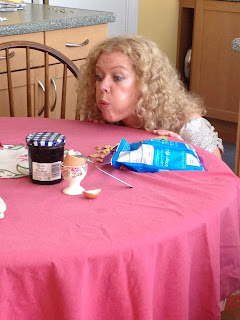 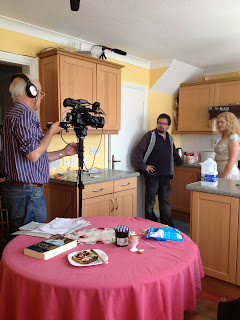 Top photo: Cameraman and editor/director. Middle photo: an angel trying to move a table mat. Bottom photo: Human and angel waiting for cameraman to say 'rolling', and director to say 'and Action'!
You will be the first to know when "Listen to your Angel" goes live!
Posted by MadelineAnn at 12:47 1 comment: