I'm interrupting the flow from A-Z to bring you a piece by Catherine, whose book "Burning Bright" just came out. It is well worth a look. Catherine is a born story teller:

The Power of Stories.

I recently had the pleasure of hearing a Native American storyteller.   Her name was Dovey.   She is a member of the Lakota.   She told us that, in her culture, children are never punished for bad behaviour.    The Lakota believe that if a child is continually disciplined she will learn that discipline is something outside themselves and never learn self-discipline.  So do they just let them run wild?   No, they use stories.
When a child does something dangerous, or rude, or in some way unacceptable. A parent, or more often a grandparent, takes them aside and tells them a story from the great treasury of traditional stories.   The story is of course related to the child’s behaviour and shows what effect that act has on the world and on the individual.   And this approach works,
Stories are more than mere entertainment, they can change behaviour.   I was travelling one time with a friend in the car of a boy-racer.   He was way over the speed limit thinking he was Louis Hamilton and I was terrified.   I begged the boy-racer to slow down.   He laughed and called me a stick in the mud.  My friend made no comment on the driving he just told us a story of a speeding car and a hideous accident.   The boy-racer slowed down and stayed within the speed limit for the rest of the journey.
When I write stories I want my readers to enjoy them.   A lot of what I write is humorous because I want to entertain but I also because humour is subversive.  When people laugh they open their hearts and their heads. I want to show how humans behave and what makes them do what they do.   But often there’s more to it and sometimes I do not realise what it is till the writing is done.   Sometimes it takes someone else to tell me what it was! 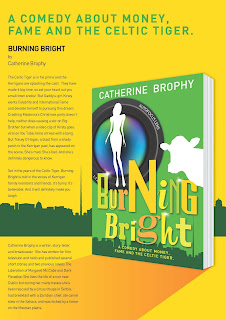 Writing Burning Bright gave me the chance to laugh at the madness of the Celtic Tiger years and also to look back to a time when we Irish had little else but out pride.  And the question I’m asking myself and my readers is; can we hold on to the best of both worlds?
Posted by MadelineAnn at 19:44